Yesterday, a lot of life was breathed back into the campus.  All the faculty were back preparing for classes and getting last minute preparations ready.  A fair amount of students were also back.  The new freshman class was getting oriented to the place and orientation leaders were running around as well, doing an excellent job I might add.

Towards the end of the day all the faculty put on their academic regalia and processed over to convocation.  I have to say that I really think academia is both great and humorous in all the tradition and pageantry that goes along with it.  The St. Andrew’s Pipe Band of Vermont performed the processional and recessional on the bagpipes, and it was truly something to behold. 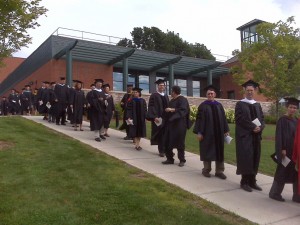 The best speaker of the entire ceremony was clear and away Pat Robins Chairman of Symquest who was receiving the Distinguished Citizen award.  He talked mainly about service to the community which is something I have been thinking about lately.  I know that I would really like to get more involved making the place where I live better.  He also talked about how fear is one of the only things that can stop us.  It stops us from undertaking risks and new challenges.  His speech was an uplifting one and I can see why he received this award.

The only unfortunate part of the whole thing was that at some points the students started talking while people were giving speeches.  I can understand their excitement seeing as how they are entering a completely new phase of their life and everything they are used to has changed.  I also heard that last year only a handful of the new students showed up, so I suppose this is quite the improvement.  I am probably just becoming an old fuddy duddy anyway.

There was one final thing that I thought was very cool.  President Dave Finney made the students a promise that if they had a 3.0 GPA by sophmore year, he would pay for their passport to study abroad.  Bravo sir.