Yesterday, I attended the Burlington Book Festival.  The best session was one entitled Writing in the 22nd Century: A Panel Discussion.  It was a terrible title that did not really fit what they were talking about.  Nevertheless, it was a great session.  They were actually talking about the 21st century — more specifically the near future.  It was also not limited to writing.  It was a discussion about writing, reading, and consumption of information.

The panel was composed of Steve Benen a political pundit blogger from the Washington Monthly, Cathy Resmer online editor of Seven Days Newspaper, and Ann DeMarle, head of the Emergent Media Center at Champlain College.  It was moderated by Jeff Rutenbeck Dean for the Division of Communication and Creative Media at Champlain College.

One thing that got people going in the audience was when Jeff said that books were an inefficient means of communication. Publishing online is much quicker and people can interact and have a conversation with the information, whereas books take years to publish and you cannot interact with a book.  The audience got defensive and sentimental about books, expressing that they did not want them to go away.  Someone actually stated how books were one of the most perfectly evolved forms of media.  Jeff also passed around a Kindle for people to gawk at.  The guy next to me was ogling it for about five minutes. 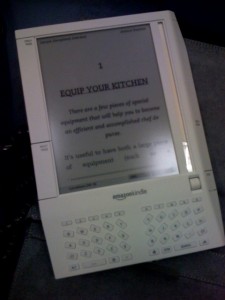 What was especially interesting was the discussion that ensued after Jeff brought up the idea that textbooks are “so superficial.”  He said that for his classes, “you could get 90 percent of the information in the textbooks from Wikipedia.”  At this a student commented that he did not go to textbooks first.  He went to Google or YouTube or blogs or other online sources.  Barbara Shatara, a librarian at the Fletcher Free Library asked him the same question I was thinking: how do you evaluate this information for credibility?  His answer was that he evaluated by cross referencing.  If he found info on one blog he would look and see if it was confirmed in other places.  If there were more people agreeing with something than disagreeing then he would believe it.

This gives a good insight into how information is being evaluated in this era.  Instead of looking for some authority people look to the masses.  “Do a lot of people believe this?  Ok, good then I will too.”  A lot of people believe that evolution is a falsehood and that global warming is a fabrication.   A great danger with this is when looking to corroborate or disprove a piece of information on the web, it very much depends on how you are searching.  If you search with keywords only  related to creationism, or find a creationist website and start following their links, the information your find is going to be colored in a very specific way.  With a mindset such as this, the tyranny of the majority can then determine what is true and not true, and that is very dangerous.

There were a number of debates back and forth and everyone really got into the session.  I was surprised at how many people were engaged and actually caring about these issues.  I guess information literacy is a real issue that people outside of libraries or academia care about.