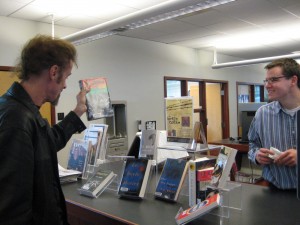 The author T.C. Boyle was on campus this week, and I was able to meet him. He stopped by the library to view cover art that students had created for his novel The Tortilla Curtain. Some of the art was pretty amazing and very creative. I know we are told to never judge a book by its cover, but everyone does it anyway.

He also spoke Tuesday evening, which I live-twittered. There was something that he said that really resonated with me. He said something to the effect that he doesn’t know what he thinks until he writes about it. In describing his writing process for The Tortilla Curtain he said that around the time he was writing the book (as always) there was a big debate about immigration with people staunchly on one side or the other. It sounded like Boyle wanted to learn more about how he felt about the controversy, so he wrote a story about it.

His way of writing seems pretty amazing. He simply goes through and writes slowly and thoughtfully without really changing things after he decides on them. He never plans out endings. He lets the story go where it takes him.

This hit home with me because I think I am the same way. I often am not sure what I think about things. Writing things down, and blogging makes my thoughts more concrete. I may not always agree with myself later, but I can see my own thinking process and even have a discussion with myself later. That is one of the great beauties of writing: it is a way of freezing time, taking a picture not of physical things but of thoughts and feelings.