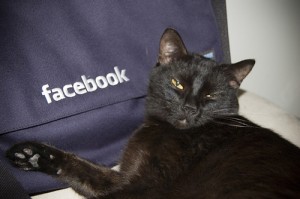 I have risen to a new level of geekdom. The other day, as I was putting together a Facebook page for the library I ran into some problems, so I had to learn some FBML.

We recently switched from Meebo to Digsby for our IM reference widget. I wanted to put that same Digsby widget into our Facebook page so students would be able to connect with the library there as well. There is already a “Digsby widget” application  available in Facebook, but unfortunately when I tried adding it to the library page it kept failing and instead added itself to my personal profile.

Then, I decided I could just find an app that just allowed me to copy and paste the HTML to embed the Digsby widget, but none of those worked correctly either. Finally, as I was about to give up, I found an FBML app in this blog post. I googled FBML and found the Facebook developer’s wiki. It was easy enough to map FBML to the HTML that I already knew.  So I wrote a few lines of FBML including the location for the Digsby widget, and lo and behold it showed up there on my Facebook page.

This was one of those moments similar to when I first started writing HTML or CSS, when you just take a step back and say, “oh wow; I actually just created something.”  What amazes me is that is that I could actually understand enough about HTML to hack together something that worked in FBML, a totally new language to me. It is just a little over two years since I started learning HTML. Ever since then my curiosity and interest in technology in technology has been piqued.

I realized that there must be some solution to my problem, and kept trying different approaches to solve it.  That is the part I really love about technology. You are constantly learning and solving problems.  If something doesn’t work you have to keep trying until you find something that does. And with every problem you have to learn a little bit more.