I forgot to mention the Saturday evening highlights after the workshops and presentations were over. There was a tweetup at the Sheraton hotel that was very well attended. It seemed like at least about 20 or more tweeps were in attendance sharing thoughts and drinks.

I have found Twitter to be really useful for conferences in terms of both networking as well as a perpetual awareness tool. By searching for the #acrl2009 tag on Twitter Search I was able to see what other people were thinking and doing in the conference. I could even see the thoughts of people who were in the same room as me attending the same presentation and have a discussion twenty chairs away without being disruptive. I can see why Twitter is growing so fast.

The all conference reception held at the EMP/SFM. There was a lot of awesome music paraphernalia as well as enough sci-fi and robot artifacts to keep any geek drooling. But there were also massive amounts of librarians dancing. I know from my grad school experience at UW-Madison that librarians are not afraid to do max partying, but I wasn’t sure if it was a universal certainty. It clearly is. Librarians are people too. Despite the stereotypes, they like to have a few drinks, cut loose, and dance just like everyone else (albeit in a slightly dorkier way). 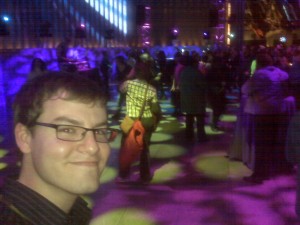 Sunday morning I attended a panel session on User Experience called If Fish Markets Can Do It So Can We hosted by Steven Bell, Brian Matthews, and Valeda Dent Goodman. I think it opened my eyes a bit. Libraries are often too focused on their stuff (books, databases, etc.) and not the user experience. Sure we have lots of stuff, but if it is difficult or annoying to use, people are just going to use Google instead. We’re not just selling our stuff, we‘re selling the experience. In a lot of cases the experience is the product.

Coffee beans are dirt cheap, but Starbucks charges three bucks for a cup of coffee. The coffee itself doesn’t cost that much. Starbucks is adding value by selling the experience (hip music, nice atmosphere, etc.). I hope to think about this more in the future and ask myself: what is the experience of our users and how can we improve it?

The final conference event was the closing keynote speaker Ira Glass. Once again, I had never heard of him (I feel like I live under a rock), and once again I was astonished. I love finding out new things and hearing new people’s ideas.

Glass was an excellent choice to close the conference. His format was similar to his radio show where he would inter-mix him talking with segments that he has done and offering the audience insights. The overall theme was about storytelling. Glass discussed how stories have action and then a little nugget of insight, repeating over and over. It also has to feel like it is going somewhere. It doesn’t matter where, just somewhere. This is what builds suspense and makes for good narrative. This is what Glass does on his show.

I think this idea of being a good storyteller is important to many different people, not just radio hosts and journalists. Facts make sense if laid out in a rational way, but if couched in an interesting story, they become more memorable and the audience develops a better emotional connection to them. Telling a good story can help you sell ideas or teach students. It is an extremely beneficial skill to have and I hope to work on my own storytelling ability.

I listened to the This American Life podcast on the plane and have likely found another piece of information with which to overload myself. I look forward to collecting together all that I have gained from this conference whether it’s new ideas, new contacts, or fresh perspectives and begin using them to improve both myself and Champlain College.