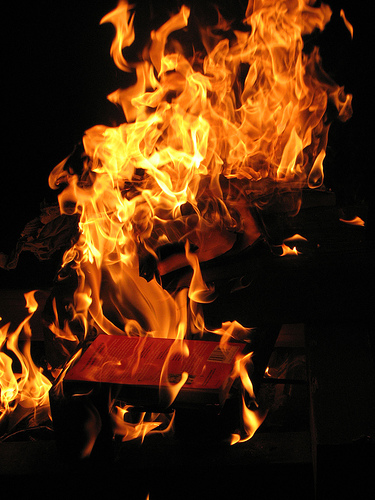 When you buy a physical book you own it. You can read it, dog ear the pages, and even resell it. It’s called the doctrine of first sale. This is not the case when you buy books on the Amazon Kindle. Yesterday they deleted copies of Orwell’s works 1984 and Animal Farm from customers who purchased them on a Kindle, while crediting a refund to their accounts. You can read about it in the Wall Street Journal.

This raises some serious questions about ownership, privacy, and the future of books and reading. People, especially librarians, have been questioning ebooks and their implications since they have come out. Something electronic is much easier to quickly change.  Much like in the deleted Orwell book 1984:

“Day by day and almost minute by minute the past was brought up to date. In this way every prediction made by the Party could be shown by documentary evidence to have been correct; nor was any item of news, or any expression of opinion, which conflicted with the needs of the moment, ever allowed to remain on record. All history was a palimpsest, scraped clean and reinscribed exactly as often as was necessary.”  Book 1 Chapter 3 (Also on diveintomark.org)

Ebooks, as evidenced yesterday, are also much easier to be destroyed. It reminds me of another dystopia: Ray Bradbury’s Fahrenheit 451. In that novel the firemen had to come into your house, remove the books and burn them (or just burn the house down). Now books can simply be deleted via wireless internet. Poof. It’s gone. Like you never owned it.

Amazon has now said publicly that they will not do this again. But this makes me question the Kindle and the impermanence of ebooks. Big fail on Amazon’s part.