In Borders the other day I happened upon this display. Glancing at it, I figured “oh, looks like they’re hocking the Twilight books pretty hard still.” 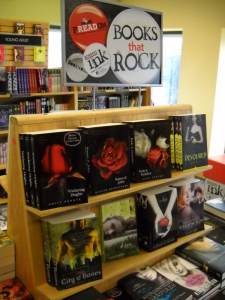 But on closer inspection, that wasn’t the whole story. There was a Twilight book or two in the vicinity, but the books they were hocking were a bit older. In fact, they were classics. Playing on the black and red cover styles of the Twilight books, they had Wuthering Heights with the tagline “Love Never Dies,” and a sticker that lets you know it’s “Bella & Edwards favorite book.” They had Shakespeare’s Romeo and Juliet with the tagline, “The Original Forbidden Love…”

They were attempting to fleece young people into reading classic literature. Kind of a good idea. There’s that hackneyed adage about not judging a book by it’s cover, but that’s exactly what everyone does. People who enjoy Twilight have probably read all the books by now, but that doesn’t mean there’s nothing left to read. Repackaging classics into thicker volumes with larger print and a flashy cover just might get young people to read these fine works of art. Most of the time it’s all about appearances. 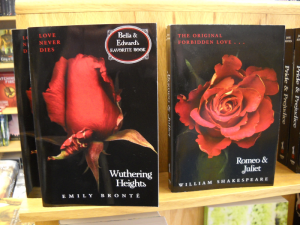 How can libraries steal this idea? How can we change the appearance of something to make it more appealing or relevant to users. An example might be your library’s website. There’s good content and useful tools on there, but maybe the way they’re displayed isn’t exciting or makes users turn to something easier.

Are there other ways we can change the appearance of something, either physically or online, to increase usage?