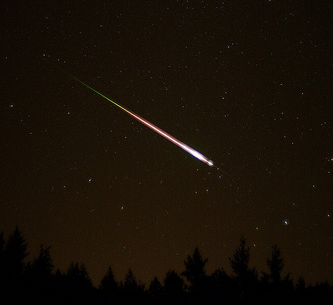 We had an all campus retreat this week. It was all day and the chairs were uncomfortable, but there were periods of illumination and inspiration.

One of these periods was when someone at our table told of a moment of affirmation when a student was really in their shell while studying abroad. This staff member encouraged the student to seize the opportunity while he had it. He didn’t hear back from the student for a long time. When the student came back though, he came to the staff member’s office and told him that it was that conversation that helped him turn the corner and make the study abroad experience amazing.

This made me think about times like that in my own career – moments of affirmation that help you realize that you are making a difference. It’s like watching a meteor shower. You can get discouraged, but sometimes there are spectacular flashes that are utterly beautiful.

In my job I think of reference interviews where students start understanding how they’re going to start approaching their project, or when they get super excited about their topic. I also distinctly remember a class that I thought went OK, but a student saw me in the library later and told me how useful it was. It’s times like this that give me so much joy.

I know other people have had experiences like this. What’s your story? When was a moment that you realized, “hey, this is why I became a librarian?”