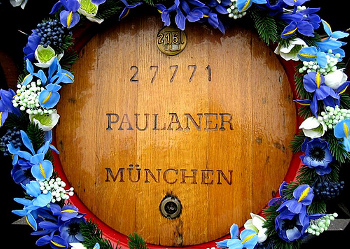 Last Spring I went to the Montbeerlier festival at the Three Penny Taproom with my girlfriend Heidi, my colleague Sarah and some other friends. The festival consisted of a medium sized tent thrown up in a parking lot behind the bar. There was music, free cheese samples, house made sausages, and 12 different “extra special” cask conditioned kegs of beer. By all accounts it was awesome. And apparently a lot of other people thought so too.

After a while it began to get fairly crowded (for Montpelier) and about halfway through the festival they remarked that they were running out of beer. Some people had already purchased tickets to get a beer and were getting upset that they would be out of luck. Fortunately the organizers announced that they would bring out a couple kegs from the bar. Moreover, people would be able to continue the party inside the bar and their tickets would be accepted there as well. A beer crisis was averted and overall it seemed to be an extremely successful event.

What does this have to do with libraries? More than once I have heard the concern at different institutions about too much success. “What if too many people come?” “What if we are overloaded with questions?” At our institution we recently added an IM widget to every course in Angel, our LMS. One of the concerns raised when deciding whether or not to put it in was, “what if we get too many questions?”

This type of question is a legitimate concern, but not one that we should spend much time on, especially at the start of a planning process. This question boils down to “what if we have too much success?” And I would answer “great!” If we spend too much time on this question while planning events or services, then we handicap ourselves. We’ll begin planning ways to limit our success. It’s an easy way to kill good ideas before they even have a chance to incubate.

If the Montbeerlier festival said, “hey, what if too many people come” they may have promoted the festival less, or limited the number of people that could take part. As it was, the festival was a huge success. There were a few problems along the way, but they were quickly adjusted for and everyone was happy.

In your initiatives, plan big. If there are some problems you can adjust along the way, and through some failure learn from your mistakes. But don’t worry about too much success. There’s no such thing.