People have been discussing the demise of RSS for a while. Even in the library world, Lauren Pressley had a great post not too long ago about how she is ditching RSS for Facebook and Twitter. This doesn’t point to the uselessness of RSS though, it points to the development of interesting, beautiful, and intuitive new ways to discover content.

RSS is far from dead. I still use my Google Reader, not to mention Twitter for content discovery. But I’ve also been playing with a several other services and apps to stay current, get new ideas, and serendipitously find things I didn’t even know I was looking for.

Alltop is a site that aggregates some of the top resources from around the web on certain subjects. They bill it as a “online magazine rack of the web” collecting headlines from various blogs and online sources. You can look at all the popular posts in topics like design, science, food, and they even have a page for libraries.

Whereas Alltop is a magazine rack, Paper.li is a customizable newspaper for the web. You can use your Facebook stream or Twitter lists that you’ve created to make a daily web newspaper. Playing around with it, I created a paper called The Info Pro Intelligencer using my librarians Twitter list. Paper.li then, after creating a list, selects content from the list and then displays stories, videos, and pictures following a newspaper format on a daily basis. You can even set it up to tweet when the most current issue is available. 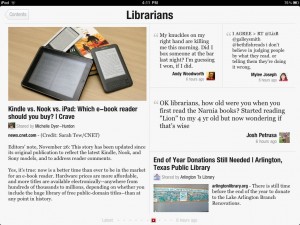 Flipboard is an app for the iPad that again describes itself as a “social magazine.” You can use lists or individual feeds from Twitter or you can use your Facebook profile to create different e-magazines that parallel your interests. You can also share any of the stories right from the app. It’s a really beautiful design, and a very different way of discovering content than staring at a list of tweets. 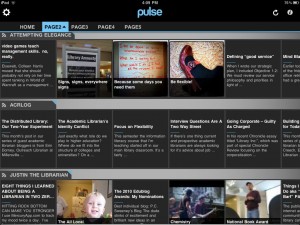 Another iPad app, Pulse breaks out of the newspaper/magazine mold and creates an entirely new way of viewing news that interests you. It is a really intuitive way of viewing content (Steve Jobs even featured it in his keynote about the iPad). You can subscribe to certain blogs or feeds and it automatically populates itself whenever you open it. And unlike an RSS reader, things don’t keep piling up. You just get the most recent 25 or so posts.

The model of trying to read everything is impossible. There is simply too much content out there. You can’t be scared, as Bobbi Newman states, to declare bankruptcy on your reader and mark all as read. Better yet, instead of letting things pile up and feeling like you have to read them all, try using services that allow you to pop-in and pop-out of the stream of content. You won’t miss anything.