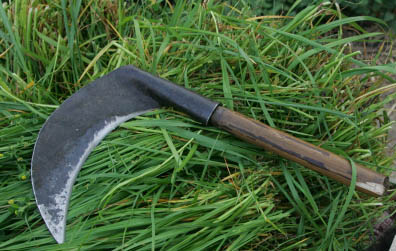 I enjoyed both Karen Schneider’s post and Meredith Farkas’ follow-up post about devil’s advocates. They talk about new ideas and how they require a lot of experimentation and iterations as well as people to challenge them to make them stronger. I’ve been thinking about this topic for a while, and I think it’s a very important one for people in the library profession to think about, especially those in leadership positions.

Like I mentioned in my last post I am reading the book What Technology Wants. In this book Kevin Kelly relates a story about a missionary in China introducing a new technology which serves as an excellent parable about the resistance to new ideas:

“The missionary wanted to improve the laborious way the Chinese peasants in his province harvested grain. The local farmers clipped the stalks with some kind of small hand shear. So the missionary had a scythe shipped in from America and demonstrated its superior productivity to an enthralled crowd. “The next morning, however, a delegation came to see the missionary. The scythe must be destroyed at once. What, they said, if it should fall into the hands of thieves; a whole field could be cut and carried away in a single night.” And so the scythe was banished, progress stopped, because nonusers could imagine a possible — but wholly improbable — way it could significantly harm their society.”

Devil’s advocates are useful people to have around, but they can also stop new ideas in their tracks. If we try to imagine every negative thing that can happen with a new idea it will surely die. Often devil’s advocates imagine unrealistic or unlikely situations that have little chance of happening. Looking at something new as a threat leads to no new ideas.

A new idea is a very fragile thing. It needs a healthy environment to germinate and time to grow. We as librarians and people in leadership positions should try to cultivate this environment among our teams and in our workplaces. There is a place for devil’s advocates and looking at possible challenges that a new idea could face, but it seems that should come later in the process. Libraries are desperately in need of new ideas. Just as in the case of the scythe in the story above, if we only see the negative aspects of an idea or technology we will become really good at maintaining the status quo.

So when people are proposing new ideas, listen first instead of criticizing. Bobbi Newman shared an excellent sentiment recently about contributing more than criticizing and it very much applies here. I know at times when someone is proposing a new idea I think to myself, “that’s stupid, it’ll never work.” But instead of dismissing it or nitpicking it, the more productive course of action would be to contribute to the idea to refine it or make it better. Not every new idea is a polished gem, but there may be the beginnings of something great in it. We just have to give it the proper environment to let it flourish.