This article about New York City putting QR codes on all of their building permits caught my attention. I found it interesting that a government agency was adopting this technology.

QR codes are pretty cool. Whether it’s videos, pictures or a website, it’s great to be able to attach web content to a physical object. The technology has been around for a while, but adoption in the US has been slow. In the past I have been of the opinion that they were over-hyped and that their time had not yet arrived, at least in America. But maybe now that’s changing.

When governments start adopting technologies they often start becoming more mainstream. It reminds me of how a few politicians began using Facebook and Twitter to connect with constituents, then a few more joined, then everyone rushed to register their Twitter handle. Now everyone is tweeting, from my own socialist senator Bernie Sanders to FEMA.

QR code technology it seems has reached a similar tipping point. I am seeing the little squares much more than I used to. They are all over in our awesome weekly paper here in VT, Seven Days. 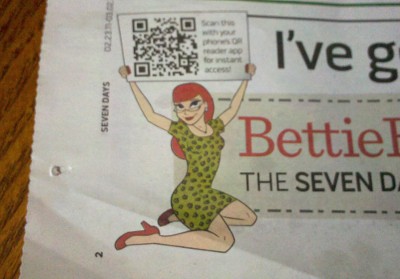 They are also around at a lot at our college. I’ve seen them on Student Life and Study Abroad posters. They’re in the cafeteria on the napkin holders. Even the alumni magazine from my alma mater is adding them to their issues. 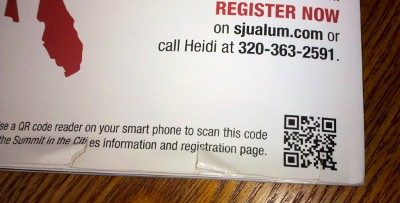 There are a number of libraries who have started pioneering this technology and have done some really interesting things with QR codes. Syracuse University Library Learning Commons is using them on their bookmarks to link to ways to get help from a librarian. The San Diego State University Library is using them in their catalog, so instead of writing down location info you can scan it. Lafayette College Library used QR codes to create a “Where In The World is Carmen San Diego” game geared towards first years to add some fun to a library orientation. I love seeing all this creativity around emerging technologies.

The time for QR codes might not be ripe everywhere, but I know I’ve seen a lot more of them lately. Is this the case in other places? Are QR codes finally becoming mainstream?