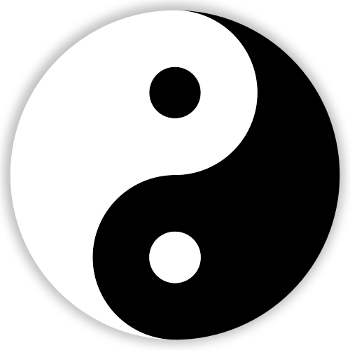 Taoism is, among other things, a philosophy that originated in China in the 3rd or 4th century BCE. It began with Lao Tzu’s writing of the Tao Te Ching and is still around today. It is a philosophy which values balance, moderation, compassion and being pliant and adaptable. There is a wealth of wisdom from the Taoist philosophy that could be applied in librarianship.

Laws Create Lawbreakers (58) – “Where government stands aloof, the people open up.” Instead of constantly trying to control the behavior of your users, see what they do and create guidelines around that. Instead of setting furniture up a certain way and then moving it back when it gets out of place, see what configurations users like and allow them the freedom to make spaces their own. Instead of having strict mobile phone or food rules, recognize that as humans we need to communicate and eat. Outlining numerous strict library policies makes for a lot of broken policies, shushing, and saying no constantly.

Bend, Don’t Break (76) – “When a plant becomes hard it snaps.” Libraries, especially in academia, have done things certain ways for many years. We continue purchasing print journals. We still have items on microfilm. We still tell people to turn off their mobile phones in the library. In order to not become outdated or obsolete libraries and librarians should cultivate an attitude of softness. We should examine services, collections, and policies constantly to see if they are still meeting user needs and if they are still in touch with reality.

Realize When Enough is Enough (9) – “Instead of pouring in more, better stop while you can.” A key concept in Taoism is that one opposite follows another. Emptiness follows fullness. As librarians, we keep taking on new roles and offering new services without dropping other services. This is a recipe for disaster. Instead of doing a few things really well, we fall into the trap of doing a lot of things poorly. By holding onto legacy services and trying to do everything, we are in fact defeating ourselves. There is only so much energy and so many resources that we can provide. We need to think strategically about what we can drop and what is most important to our community. One way is through a great presentation that I saw at ACRL about Planned Abandonment.

Be Like Water (8) – “The best are like water, bringing help to all.” Water helps all people, that’s it’s nature. Just so, we should constantly be thinking about how we can best serve others. Water also is quite adaptable. It can fit easily into any sort of container and it naturally goes with the flow. Librarians too should be able to change themselves, their services, and their resources to meet their community’s needs. They should be able to adjust along with the changes that are constantly happening in the world both technologically and socially.

The Tao is typically translated as “The Way.” It’s a very nuanced concept, but at it’s core it refers to the true nature of the universe. And the point of Taoism is to live in accord with The Way. Instead of struggling against everything all the time Taoism states that humans should try to see how things actually are and live in harmony with them. This can be a very illuminating idea for libraries.

Librarians need the ability to be in touch with reality and not be blind or naive. The job of a librarian does not have to be a struggle against obsolescence or a constant proving of  their value to stakeholders and administrators. Instead librarians can try to understand what is actually of value to our patrons and be leading the parade instead of fighting against it.

The quotes and numbers above refer to chapters/sections of the Tao Te Ching translated by Red Pine, though there are plenty of free translations available as well.