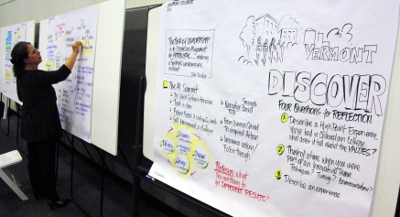 A little over a week ago Champlain College hosted a two day summit called Building Partnerships for a Thriving Workforce. They invited college staff, faculty and students, but also a lot of community members, business owners, parents and local stakeholders. The focus of it was creating the workforce of the future which involves both the college but also businesses that need well prepared graduates for an uncertain future. What was really interesting though, was that the summit was based on a process called Appreciative Inquiry.

Appreciative Inquiry (AI) is an organizational development method that focuses not on solving problems, but on discovering strengths and what an organization is doing well and then building on it. I’ve seen it used before in planning sessions and it works well. It can be really easy to focus on problems, what’s going wrong, and what is frustrating about an organization or situation, but that isn’t always the most productive way of making lasting, meaningful change.

We talked about this at NELLS a little over a week ago and person mentioned the idea of people becoming “addicted to the drama of complaining.” I thought this was a great phrase. It’s easy to focus on the negative or complain about annoying co-workers or what is going wrong. It’s easy to fall into the trap of asking questions like “what if it doesn’t work,” “what if we have too much success,” or “what if no one likes our idea?” While it’s important to anticipate obstacles, it’s more effective to plan for success.

For more information on appreciative inquiry I’d suggest the Library Trends article The promise of appreciative inquiry in library organizations by Maureen Sullivan. But even as a first step, during your next library meeting when the focus shifts to the problems of the organization, perhaps try to shift the question to “what are we doing well, what makes us effective, and how can we build on that?”