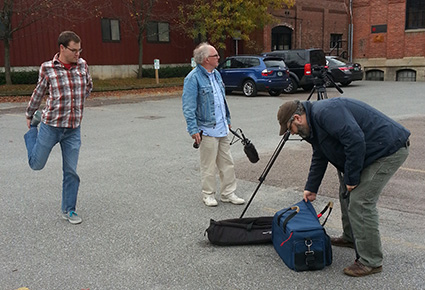 me warming up for acting/a lot of running

This weekend I spent 24 hours creating a story with some colleagues and friends for Vermont’s first Storyhack. What’s a Storyhack you ask? The local weekly Newspaper 7 Days describes it like this:

“The “hack” in the group’s name is a tip of the hat to the “hackathon,” a competitive event in which computer programmers are given a short window of time in which to collaboratively develop a software solution to a specific problem. In a storyhack, teams of storytellers collaborate to create original narratives, which are then entered into competition. StoryhackVT is Vermont’s first such event, and its focus is pointedly technological. The competing teams must concoct not just a story, but a story that must be told across no fewer than three different digital platforms.”

I stayed up late brainstorming, acting, writing, creating, singing, and tweaking various digital media with some very talented teammates. We also enlisted my exceedingly talented spouse Heidi for some acting as well. Even though we didn’t win we had a lot of fun and created a story that we are proud of. It’s a story about love, Canada, and redemption. You can watch it at http://kosmoplastique.com/ (that was our team name). Also the environment was created in Flash so it won’t work on mobile.