Follow me on this one. It’s a sensational title, but as I was in a library instruction class the professor actually compared going to the library to sex. You can’t get better marketing than this.

We were doing some Q&A towards the end of the session, when the conversation surprisingly turned to libraries and library science in general. They were asking me about my profession. These were things like, “what do you enjoy most about librarianship,” “is there a secret librarian handshake,” “and are libraries going to be around in a hundred years?” I gave them my honest opinion on these things, and they were pretty easy questions since we as librarians think about them all the time (except we probably do need a secret handshake).

But towards the end, the professor brought up a point about libraries as a physical space. He talked about how if it was possible to download all the experiences, thoughts, emotions, etc. of one human being, we’ll call him Mr. Jones, and upload it onto a computer or terminal, then someone could interact with that personality composed of all those experiences, but not the physical individual. It was his contention that the experience of Mr. Jones’ friends, relatives and especially romantic partners would be severely diminished  if they could only interact with this bodiless personality and not a physical person.

He then compared this to the library as a physical space. Of course we have all this information, and much of it can be accessed online, but again his contention was that your experience and your college career would be diminished if you were not able to interact physically with the library.

It was at this point that a sharp student asked if he was comparing the library to sex. His response? “Going to the library is the most fun you can have with you clothes on” (a la Jerry Della Femina).

I really respect this professor and love his enthusiasm and excitement about the library. But I also really found this philosophical discussion of the library very enlightening.

The library is not just a collection of information. In our Western society we are often very dualistic, separating the mind and body. But a human is not just the sum of his thoughts and experiences. It is also his physical pleasures, scars, and smells. So to is the library not just the information inside it, but the quiet study nooks, the frantic computer lab the week before finals and the interactions with friends, professors, and librarians. You’re missing an important part of college if you haven’t been to the library. 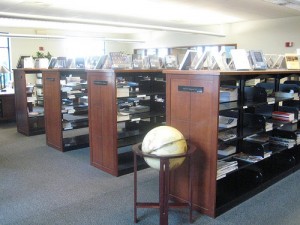