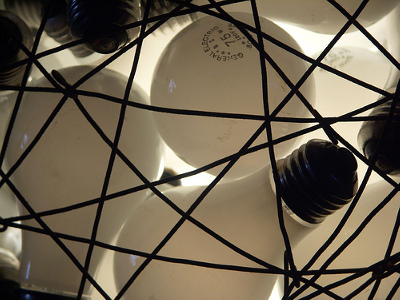 We have ideas all the time. At conferences, in the shower, talking to co-workers, lying in bed, riding the bus, there is no shortage of ideas. Some are great and some are duds, but it’s necessary to capture them if we ever want to act on them. In fact, generating and capturing ideas is a key step in the innovation process as I learned in a presentation by David Dahl at the ACRL national conference. If we do not purposefully and regularly capture our ideas, it’s easy to lose them.

On a personal level, I am sure most people have preferred ways of capturing their ideas. My colleague Sarah uses nice notebooks and different colored pens to capture her idea in an analog format. I use Evernote on my two PCs, my iPad, and my Android phone to capture notes anywhere at anytime and automatically have them sync across devices. Other people might use lists or sticky notes or different digital methods to capture their ideas. There is a wide variety of ways to capture ideas and not every solution will work for every person. You need to find what works best for you.

But we also need to capture ideas on a shared staff-wide level. We have good ideas about how we can improve library resources, but if those ideas aren’t shared, they’re useless. I have a Evernote notebook titled “Work.” My colleague Sarah has her stack of notebooks with library thoughts and ideas in them. I bet if we brought some of these ideas together, we would both get excited and some of them would get implemented. There can be a lot of magic that happens when ideas collide.

Just like personal idea capture, there are a variety of ways to bring staff ideas together. David Dahl in his ACRL presentation mentioned some of the more obvious ones like wikis, intranets and even less obvious ones like innovation management software. In talking to Steven Bell at the ACRL conference, I learned about another cool way of capturing ideas as a staff. At a library staff retreat at their institution, staff members were given small notebooks. They were to use the notebooks to capture ideas about library stuff or ideas that came from observing library users. Then at some point in the future they will come together again and share their ideas. I thought this was a creative and fun way to collect ideas, and it showed that not everything has to be shared digitally. Analog can work just as well and sometimes better.

No matter how ideas are captured, they can’t just sit there. Ideas die in captivity. They need to be shared and examined and studied to be able to flourish and become an actual change in your library.