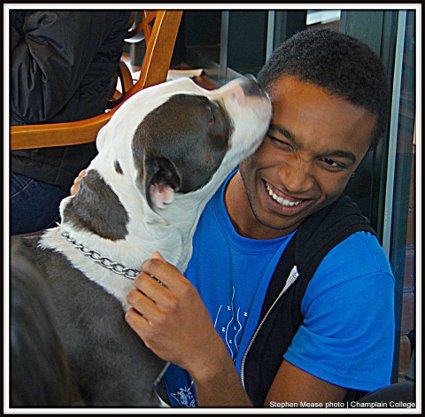 I think @champlib should rent out puppies tostudents to help you study and deal with stress. Everyones GPA would increase #campchamp #btv

It all started with a tweet. At the start of the month a student made an off-hand comment on Twitter about renting puppies to deal with stress. Last week several of us were chatting at an event about finals coming up and I mentioned the idea of pet therapy for helping with stress. Gloria, one of our awesome circulation assistants is also a dog-sitter/walker,  and she was thrilled with the idea. She knew the perfect fun and relaxed dogs to bring (Thea and Pippin).

We floated the idea by our director Janet and she asked a lot of good questions about things like noise, safety and logistics. She also believes in the value of experimentation and trying new things, so together we devised a plan to have a puppy VIP room that kept people, dogs, and noise contained. We decided we would offer dog-therapy on Monday and Tuesday from 5-8:30 (we had to work around the dogs schedules).

Since it was a fairly last minute idea, I began promoting it with signs Friday and more importantly via social media. The posts on Twitter and Facebook began to get some buzz.

@champlib puppies are the best idea ever! Yay!

So gross in #btv and finals suck but @champlib has puppies so everything is okay again. #campchamp

It was mentioned and retweeted a pretty good amount over the weekend. When it came time to host the puppies on Monday we got a few more people than we expected. In fact, we were swamped!

Our original idea of having the puppy VIP room in a good-sized office had to be replaced with a plan B of a large meeting room in the library. Once my office-mate Lindsey skillfully shuffled everyone upstairs, the event went swimmingly. Everyone had a smile on their face, and it was a completely calm and relaxed environment. A news crew even ended up covering the story! 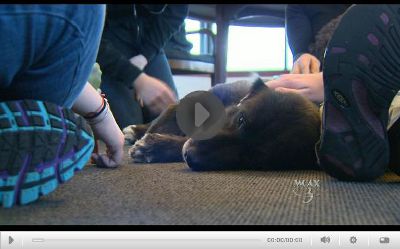 There were plenty more tweets from students either asking about the dogs, posting pictures, talking about how Champlain is the best school ever, or posting our news video. I heard from multiple students either on social media or in person how awesome an event this was and how it actually helped during this stressful week.

My school is the best school, my school has puppies #campchamp twitter.com/molly_emerson8… — Molly Emerson(@molly_emerson8) April 23, 2012

This event is a great example of how social media can be leveraged by libraries and organizations. It’s a tool for listening to your community, responding to your users, promoting relevant services that meet their needs, telling stories, and demonstrating value.

How better to demonstrate value than having students tweet things like #bestschoolever, my college > than your college, or proud to be a Champlain alum.